00:00
Welcome back to Cyber is empty, A 98
00:04
3 66 network and fundamentals certification prep course.
00:09
Again, this is a continuation off margin Emma, too.
00:13
In fact, in March 2, we discussed a number different topics ranging from the S I R model to analysis and comparison
00:21
riel vertical communication, Effective horse on a communication. And we also begin discussing the seven layers off the open system into connection model. In fact,
00:30
in the last video
00:32
proud of this video, we discussed layer for which we learned that therefore its response for end in communication between two devices. We learned that this includes taking data from the session layer
00:45
and breaking it up into chunks. Call segments before sitting on two Layer number three, which is your network land. We earned us learned that at layer three,
00:53
that's where you're wrong. Operates at the layer is a layer three type device. Now, in this particular presentation, we go continue our by discussing left fire, which is a session layer and layer. Number six wishes your presentation layer.
01:07
With that being said, let's begin by first all taking a pre assessment quiz question
01:12
which layer
01:14
an open system interconnection model response for logging on and logging off. Is it a physical?
01:19
Is it be session
01:22
or that see application or D presentation?
01:29
If you said like that B, which is session, you're absolutely correct because assessing that what it does, it governs the ecstatic Smith termination and synchronization of sessions within your operating system over a network and between host when you log on you creating a session while on the network.
01:49
So let's begin by discussing this session later. Now, this is a layer responsible opening and closing communication between the two devices. The time between one and communication is open and close is known as a session.
02:00
The session will ensure that the sessions stay open long enough to transfer all the data being exchanged and then promptly closing this session. In fact, the session is also synchronizing data transfer with check points. For example, if you have 100 megabyte file being transfer,
02:17
the session there could set a checkpoint every five megabytes.
02:22
In the case of a disconnect or crash. After 52 megabytes have been transferred, the session could be resumed from the last checkpoint meeting on a 50 MAWR megabytes of data needs to be transferred without these checkpoints, we're gonna happen. Then town transfer would have to begin
02:39
again from the scratch. So again, decision later. What it does Some examples. Net bios
02:45
and network core protocol. Again, the components do they measure. Use a session. Track your users sections well,
02:53
so
02:53
when you look in a session there, it's again in response for establishing, maintaining and terminating the session called a session, a session is exchanging messages between computers. Other words. A dialogue
03:06
Maginness session involve signage, ation and use the tax and dialogue controlled. Other words who transmits and for how long.
03:14
This next night show the example of a command call Net Stat Command. Now what this command does is a space a list of all the connections to and from your computer in New Miracle format.
03:29
The session led US response for dollar control as well as synchronization. That brings us to now the good old presentation layer.
03:38
Now this layer is primary responsible, preparing data so they can be used by the application. In other words, Layer three makes the data presentable for application to consume
03:49
the presidential lives. A sponsor for translation, encryption and compression in your data when you have to communicate advice that communicate, maybe using different encoding methods. So layer six response for translating the incoming data into a Centex that the application layer off the receiving advice can understand
04:05
if the device are communicating over encrypted connection
04:10
layer sixes response for Adam the encryption on the centers in as well as decoding the encryption on the receiver and so that it can present the application there with UN a crib, it readable data
04:23
family.
04:24
When you look at the presentation, there is also responsible compressing data it received from the application Lear before the limit to lay off. Five. This helps improve the speed and efficiency of communication by minimizing my data that would be transferred
04:43
now. The president is also response for translation compression as well as encryption.
04:48
So in review we learned in this session later is responsible establishing maintaining, terminating a connection call a session. A session is an exchange of messages between computers. Other words you call it dialogue. We learned that presentation later, Response for data, translation, other words formatting compression as well as encryption.
05:08
That brings us to a post assessment course in
05:11
which layer in the open in an open system. Interconnection model is used to encrypt the data.
05:17
Is it a Your physical layer isn't be. Session isn't see application or D
05:25
presentation.
05:28
If you select the presentation, you're absolutely correct because the presidential and what it does, it covers both compression and encryption.
05:42
In the upcoming presentation off the discussion of the seven layers of us our model. We will finish up this particular discussion by discussing Layer seven, which is your application layer.

This MTA Networking Fundamentals certification course provides an entry point to the Microsoft Technology Associate (MTA) exams that validate the fundamentals needed to begin building a career using Microsoft technologies. This course assumes some hands-on experience or training but not assumed on-the-job experience. 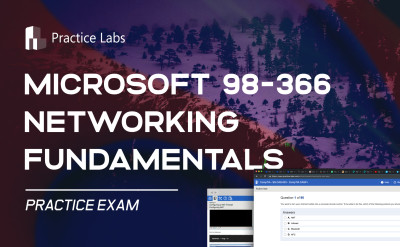 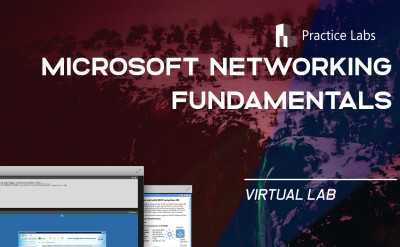 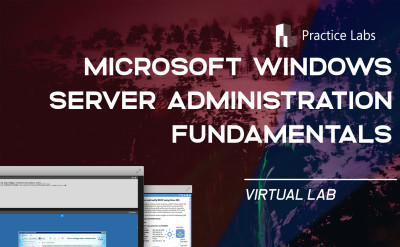