00:00
Let's continue on the prepping for CMM. See now let's review how the D of D
00:10
is looking at the cyber effects.
00:14
So in this video, we're going to learn as a contractor,
00:20
what will the O. D require of me as a contractor to do in relation to the current cyber lion Escape
00:28
also will understand some of the cyberattacks affects on the contractors
00:35
and also where or cyber threats today
00:40
and additionally then insider threats within the contractors world.
00:47
So do you. D has noted that cybersecurity is affecting not Onley their contractors, but everyone realizes cybersecurity is a number one issue out for business. Right now, costs are escalating
01:04
for companies not only to defend against cyberattacks
01:10
but also some of the ransomware, etcetera the cost to particular companies that do get breached.
01:19
So with that, D o. D realizes that
01:23
some of the contractors, especially when you look at the mid and smaller contractors, don't always have, or they may be aware cyber and have some of the
01:41
firewalls etcetera put up. But there's issues as far as how to protect the data.
01:51
So with the data breaches that are occurring and historical, one is wanna Cry and Microsoft support Recently, I food January 22nd actually had 250 million support records exposed. So,
02:09
as you can see on the graph
02:12
there are from back in 2001 it seems like a minimal amount of attacks occur. Toe where you see the algorithmic effect of attacks has really escalated, and
02:27
the Department of Defense and the government overall realizes that cybersecurity
02:32
is going to continue to rise in algorithmic effect.
02:39
Now some of the top cybersecurity threats there are external ones that occur where they're trying to breach the firewall, view some of the ports etcetera. And then there's the phishing attempts which fishing coming through the
02:58
e mails and the social engineering as far as
03:04
they're coming in with the email as if they're the C. I. O. R. The CEO of the company that you work with.
03:12
In fact, they're getting really good at being able to take the logos the U RL's and also emails. Well, they'll alter one character where zero becomes a no or the O becomes a zero so that when you look at the email
03:27
coming in, it actually looks like it comes from one of the sea level people
03:32
and with the expertise of the cyber security people out there in the hackers, D o. D realizes they have to step up their game so that they can be assured that the contractors were following the most recent
03:51
controls against the hackers. So this is where the sea MMC is really as kind of arisen from is that there has been over $600 billion
04:04
against
04:06
the U. S. As far as loss of data and information. And there is a figure that I saw. They came out where that interpret lates down to each household has been affected by $4000 a household as faras the dollar effect against you
04:27
as far as what hackers have actually done because of rising costs of other firms trying to recoup
04:32
the losses that have occurred
04:36
from the ransom wears etcetera.

This Cybersecurity Maturity Model Certification (CMMC) training provides an overview of how to prepare for future certification, including its requirements and why it is important for contractors working with the Department of Defense.

IT Advisor for Regulatory / CMMC Environments at Corporate Visions
Instructor 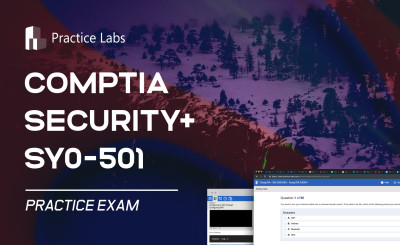