Sources, Motives and Targets of APT

WHAT IS ADVANCED PERSISTENT THREAT (APT)?

An advanced persistent threat is a prolonged and targeted cyberattack in which an intruder, or a group of intruders, establishes their illicit presence on a network to infiltrate and/or exfiltrate as much valuable data as possible without being discovered.

An APT's life cycle is much longer and more complex than any other kind of attack. A few examples of APT will be discussed later in the article. The following are the various stages of an APT's lifecycle: 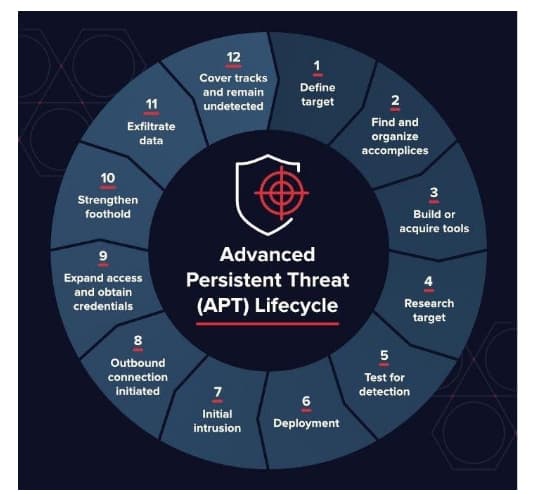 Get Started With The "Advanced Cyber Threat Intelligence" Course Today >>

SOURCES, MOTIVES, AND TARGETS OF APT

Who is behind APT?

An APT has actors/sources with an apt amount of sophistication, organization, and resources to carry out the attack, unlike other (less sophisticated or determined) attackers. APT actor(s) persistently target the specific organization or entity and adapt accordingly to achieve their goals. Advanced Persistent Threat actors may be:

What are the motives behind APT?

Who are the common targets for APT?

APT actors have industry-specific targets, which may include valuable information or assets and provide the actors a motive to perform the attack. The types of targeted information and assets included may be:

How to detect an APT?

Despite being hard to detect, APTs may have certain warning signs that an organization may notice after or while it's being targeted by an APT, which include:

How to manage an APT attack?

Since APTs are targeted and skillfully planned attacks, they require a layered security approach:

The best practice for preventing the installation of backdoors and blocking stolen data extraction is by monitoring incoming and outgoing network traffic. Traffic monitoring helps warn the security teams of any abnormal activity, which may further help them identify malicious activity. Internal traffic can be monitored using network firewalls and provides a granular view of the user interactions within the network. This may immensely assist in identifying internal traffic abnormalities. File share access can also be monitored. Hence, internal traffic monitoring is useful for the detection and removal of backdoor shells.

An APT attack's success rate can be reduced by minimizing available attack surface, which can be done by whitelisting. Whitelisting helps control domains and applications that the users can install. Since the most trusted domains can be compromised, whitelisting is far from being foolproof. Old software versions are prone to be exploited, and mostly malicious files arrive under legitimate software guise. However, to perform effective whitelisting, stern update policies should be enforced to ensure the users are running the latest software versions.

Employees of an organization are the most vulnerable soft spots of their network, which is why intruders target them to infiltrate the organization's security perimeter. The targets usually fall into one of the following categories:

b. Malicious insiders: They intentionally use their credentials to grant access to the intruders.

c. Compromised users: They are the ones whose network access privileges are compromised and used by the attackers.

Files and the corresponding user activity must be compared to their baseline behaviors to determine whether it is normal or suspicious. Security vulnerabilities and suspicious activities should be tracked and analyzed to prevent a threat. A proper response plan should be created to respond and manage particular threats.

Limited access should be given to control any firewall or physical space as access points can provide an entrance to APT attacks. Any infiltration sources like open Wifi routers, unpatched servers, insecure firewall, and unlocked server room doors should be fixed as quickly as possible.

A few examples of Advanced Persistent Threats include:

Sykipot is an APT malware family which has leveraged flaws in Adobe Reader and Acrobat. It has been around since 2007 and is used as a backdoor to get full access to the victim's machine. After the machine is infected, the installed backdoor will communicate with the Command & Control (C&C) server and execute various commands on the affected system. Sykipot has been used to steal industry-specific sensitive information through targeted attacks. It can execute both command prompt and backdoor commands on the affected system using the C&C server. Execution of the commands enables the attacker to perform tasks like retrieving system and network information, rebooting the system, managing processes, managing files, and uninstalling itself from the system. Sykipot has been a part of several cyberattacks targeting U.S. and U.K. organizations like government agencies, defense contractors, and telecommunication companies.

GhostNet was large-scale cyber espionage that was discovered in March 2009. It had infiltrated high-value political, economic, and media locations in over a hundred countries compromising more than 1200 computer systems. The C&C server was based in the People's Republic of China. It controlled the audio and camera recording functionalities of computer systems belonging to embassies, foreign ministries, government offices in India, London, and New York.

GhostNet used meticulously crafted social engineering emails to deliver the trojan, and upon installation, it would connect back to the C&C server to receive and execute commands. Although the C&C server was based in China, the Chinese government denied being linked to GhostNet.

Stuxnet was first identified in 2010 by the infosec community but was under development since 2005. It is an extremely sophisticated computer worm that exploits various previously unknown Windows zero-day vulnerabilities to spread into computers. Its specific target is centrifuged, which produces enriched uranium to power nuclear weapons and reactors.

Stuxnet has a widespread infection rate and does minor or no harm to computers not involved in uranium enrichment. It checks the computer's connection to specific programmable logic controllers(PLC) manufactured by Siemens. PLCs control industrial machinery such as uranium centrifuges, so the worm alters the PLCs' programming, leading to the destruction of the centrifuges. Even while this is taking place, the PLCs will tell the controller computer that everything is functioning efficiently, making it difficult to detect or diagnose any warnings until it's too late.

Stuxnet was created by the United States and Israel's intelligence agencies and is intended to delay Iran's development of nuclear weapons.

Deep Panda was created on 31 May 2017 and is suspected to be a Chinese threat group that has targeted various industries such as government, defense, finance, and telecommunication. The intrusion into the healthcare company Anthem has been attributed to Deep Panda. Deep Panda has also been called by several other names such as Shell Crew, WebMasters, KungFu Kittens, Black Vine, and Pink Panther. Deep Panda was an APT attack against the U.S. government's Office of Personnel Management and compromised over 4 million U.S. personnel records, including details about secret service staff.

APT28, also referred to as Fancy Bear or Sofacy, is a nation-state adversary group operating since at least 2008 and is a threat to a wide variety of organizations in the world. They generally target the aerospace, defense, energy, government, and media using a sophisticated and cross-platform implant. Fancy Bear uses phishing messages and credential harvesting using spoofed websites to attack their victims and run multiple intrusion operations concurrently. Fancy Bear dedicated a considerable amount of time to develop their primary implant called Xagent and to leverage proprietary tools like X-Tunnel, Foozer, and Downrange.

APT29, also referred to as Cozy Bear, is a Russian hacker group associated with Russia's intelligence agencies. It has different projects with different user groups. Cozy Bear targets commercial entities and government organizations in Germany, Uzbekistan, Korea, and the U.S., including the U.S. State Department and White House.

APT34 conducts cyber espionage on behalf of Iran to establish its regional power in the Middle East. It was identified by FireEye and has been operational since 2014. It has had a wide variety of industrial targets, including financial, energy, chemical, and telecommunication. It uses a mix of public and non-public tools to conduct spear-phishing operations through compromised accounts and social engineering techniques.

APT37, also known as the Reaper and StarCruft, is based in North Korea. It was identified by FireEye and had been operating since 2012. It exploited an Adobe Flash zero-day vulnerability to spread the malware and gain access to the computer systems. Its primary target was to gather information about the South Korean military and government; however, it expanded its efforts to Japan, the Middle East, and Vietnam.