Incident Response: Benefits and Why Your Company Should Have A Plan 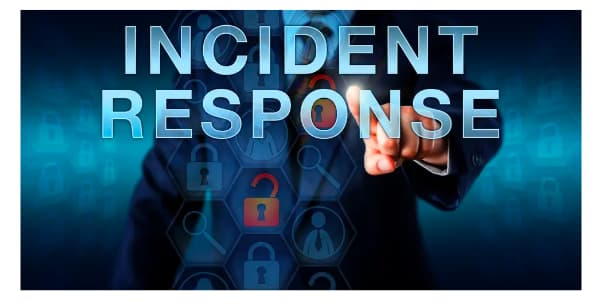 WHAT IS INCIDENT RESPONSE?

Incident Response is defined as the process used by an organization to control and respond to a cyberattack like data breaches and leaks. It also consists of ways to manage the damage or consequences. It aims to effectively manage the damage caused by the incident to the organization. In addition, it takes care of other essential factors like cost, brand reputation, recovery time, and collateral damage to minimize it and keep it on a low for the organization's well-being. Most organizations have a functional incident response plan to deal with critical situations. To know more about the planning of the incident response plan, you can refer to the course Incident Response Steps.

Some of the many benefits of an incident response plan are:

Any cyber incident can lead to severe damage to an organization's business relations with its investors, partners, and clients. It is best to inform them about a breach appropriately. If an organization fails to notify its valuable partners about a breach promptly, they are more likely to lose their customer's trust and reputation in the industry.

An incident response plan is apt to maintain the public trust of an emergency. Quick recovery from an incident will make the public realize that the organization is aware of how important it is to preserve and abide by a business continuity plan to function efficiently under challenging situations. On the other hand, if the organization loses significant resources during the incident, it may be unlikely to regain public trust and significantly damage its reputation, which may even lead to loss of business. The best way is to invest in an incident response plan well in advance as several fortune 500 companies have been victims of a cyberattack at some point in their business, so it is better to be safe than sorry.

Implementing a plan and having an organized method of action to follow during critical times is better as most security incidents are almost impossible to predict. An organization may feel well protected as they have invested heavily in their security but can still be a potential target for any unforeseen incidents.

Cyber incidents are supposed to catch the organization off guard. Still, if the security team is not geared enough to handle it effectively, the organization will face issues while defending itself. The plan will mitigate the incident's impact by remediating the existing vulnerabilities and securing the organization in an organized way. It also makes the organization utilize its resources, human resources, and tools to handle the issue efficiently and minimize the impact. This will significantly reduce the response time and overall cost associated with it for the organization.

Suppose an organization doesn't follow the required data security protocols. In that case, it may have to pay hefty fines and deal with costly lawsuits, so it is critical for them to comply and not violate any of the regulations.

Developing a business continuity plan like an incident response plan ensures that the organization follows all the industry rules and remains in compliance. Furthermore, it will fulfill the criteria for many critical situations. Hence, an incident response plan will effectively manage emergencies allowing the organization to avoid legal penalties by presenting data forensically to law enforcement agencies.

One of the central goals is to enhance an organization's incident response capabilities as it measures the weaknesses and vulnerabilities of the organization. Potential impacts of the security scenarios and associated factors are considered while creating an incident response plan. Since it significantly focuses on patching exposed vulnerabilities, it also makes cybersecurity resilient to defend it from any potential threats, enhancing overall security.

The average time taken to identify and contain a data breach is 280 days, stated in a report by IBM. An incident response plan handles potential security incidents in an organized way. Since it comprises the necessary measures to be taken by employees in specific scenarios to isolate the addicted areas and recover systems quickly, it significantly minimizes response time to a great extent. More response time means the malicious link within the organizational systems and networks can induce a more severe impact like losing more sensitive information or compromised systems. Cyberattacks that are not managed effectively can lead to potential legal, financial, and operational effects that can worsen the situation for an organization. Hence, implementation of it in such cases will lead to a quicker response time and minimal operational downtime of the organization's resources and assist them in understanding their overall security in a better way. 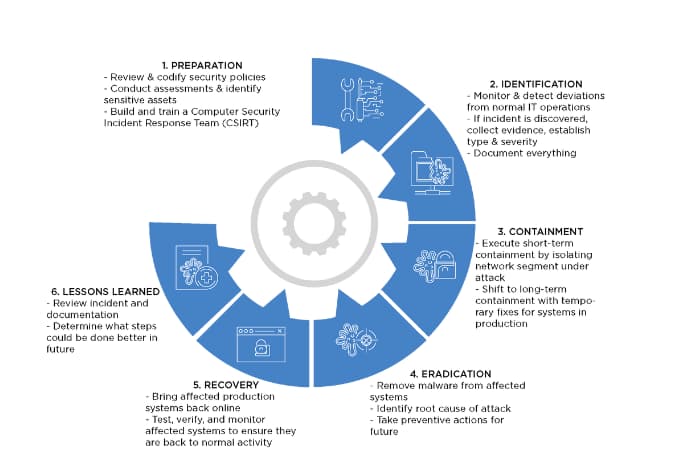 This is one of the essential phases, and the only step performed beforehand. In this stage, the Computer Security Incident Response Team(CSIRT) creates policies and a handbook for efficiently handling security incidents as they arise in real-time. So this is the stage where the communication and execution plans are documented and finalized with the essential information required to execute the incident response plan.

Here, all the possible threats are flagged and carefully analyzed based on the amount of damage they can cause to an organization. Then, its likelihood of occurrence is calculated using the data gathered by the threat intelligence and Security Operations Center(SOC) teams. Only the threats directed towards information resources and assets with realistic chances of success are marked as incidents.

While security risks are being audited, a response plan is created for the high-risk incidents. First, an alert list is completed, and the communication plan is defined, followed by relevant training sessions if required. Here is a course to know Incident Response Planning in detail.

This is the stage where the incidents are flagged for the first time. The SOC team uses many resources like intrusion detection systems, event management tools, security information, network monitoring tools, logs, firewall intrusions, and error messages to flag them successfully. Although, anomalies are identified based on the classifications carried out in the previous stages. There shouldn't be any errors while classifying the incidents as a higher number of false positives may even dilute the incident response planning process. This will lead to unnecessary incident flagging that will not cause much harm to the organization, followed by a waste of time and effort of the security team. An apt and definite indicator of an attack is when it causes loss of data or some malicious activities on the server.

The evidence about who, where, why, how, and why the incident took place is successfully gathered and followed by the documentation of the incident. This document is valid in the court of law and is updated at every stage of the incident response lifecycle.

This is the stage where the aim is to minimize the damage caused and contain the incident. The ultimate goal is to recover the control of the system, so this stage is further divided into three subparts:

Once this stage ends, the CSIRT team decides whether the incident needs to be escalated or eradicated. Suppose they are not able to contain the impact of the incident and the damage is extremely severe for the organization to recover from. In that case, it is marked as a disaster, and the disaster recovery plan needs to be followed.

This is when the attack source is assumed to be identified, isolated, and contained by the CSIRT team. The systems analysis follows to measure the extent of the compromise and check for vulnerabilities that led to the compromise. After that, the vulnerabilities are patched to avoid such incidents.

All the systems are monitored once they are patched. In addition, the attackers' reactions to these measures are noted as the security analysts will develop anticipatory responses to any further attacks that the actions may have induced onto the systems.

Since all the compromised systems' access was revoked in the previous stages, In this stage, the aim is to get all the systems up and running. It is relevant to ensure the security team has successfully eradicated the incident. All the systems and networks are tested here.

All the required security changes like patching, backup restores, and modified authentication policies start working now. All the performed steps were documented correctly as per the incident response plan. Therefore, it is safe to assume that the incident has been handled well and the systems are back in place. Incident Response Recovery is the course designed to understand the recovery phase in the incident response lifecycle.

The CSIRT's job is incomplete until they revisit the response for an after-action review. The team collectively analyzes the documentation from the identification stage to the recovery stage and tries to pitch ideas to make the process more smooth and efficient. The incident response plan is later modified and updated as per the effective feedback given by the team.

To understand the Incident Response Lifecycle refer to the course.