A route table includes a set of rules, called routes, that defines how packets should be routed in a virtual network. Route tables are connected to subnets, and each packet transmitting a subnet is controlled based on the connected route table. An Azure Virtual Network (VNet) is an image of the network in the cloud. It is the legitimate privacy of the Azure cloud applied. You can use VNets to store and control virtual private networks (VPNs) in Azure and link the VNets with other VNets in Azure.

Configuration of a Route table and Virtual Network are crucial factors in the Microsoft Azure Administration tasks. In the IT-Pro challenge virtual lab, learners will be using an Azure resource group that contains an existing storage account for use with Cloud Shell, a virtual network, and virtual machines to configure Route tables.

An Azure Administrator is accountable for executing, monitoring, and maintaining Microsoft Azure solutions, including primary duties such as storage, network, and security. In this hands-on virtual lab, you are an Azure administrator assigned to create and configure route tables and associate them with existing subnets in a virtual network in Azure. The job responsibility is to ensure that all traffic between the front-end and back-end subnets of the virtual network are routed through a firewall virtual appliance. To execute this challenge, learners will create the route tables and routes, and then associate them to the subnets. Next, they will install a utility on one of the virtual machines to test the routes and verify that traffic is routed through the virtual appliance as expected.

Azure has various system routes already pre-defined that control the movement of traffic between the internet, on-premises devices, and other devices. Azure implicitly routes traffic between subnets, virtual networks, and on-premises networks. If you want to change any of its default routing, you make it happen by creating a route table. In this challenge, the first step is to configure the frontend route table. To execute this task, learners will first create a route table named app-frontend-rt and disable BGP route propagation and associate the app-frontend-rt route table with the subnet frontend in the virtual network app-vnet. Finally, you will check and confirm the creation of a route table named app-frontend-rt with a route named to-backend, and associated it with the subnet frontend.

After configuring the front-end route table, the next important step is to configure the back-end route table. This is a three-step procedure where learners will learn how to:

IP forwarding, also called Internet routing, is a method applied to resolve which route a packet can be addressed. The method utilizes routing data to decide and is outlined to transfer a packet over various networks. After configuring both front-end and back-end, you will learn how to enable IP forwarding on the virtual appliance. In this segment of the lab, learners will learn how to:

After completing the “Configure Route Tables in a Virtual Network” virtual lab, you will have accomplished the following:

Whether you want an improvement to your earning potential in your current job position, or you are looking to start a new career, this hands-on lab will provide you with the knowledge and skills that are required to succeed as an IT professional. 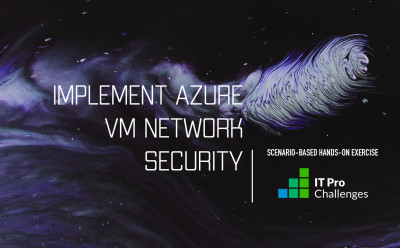 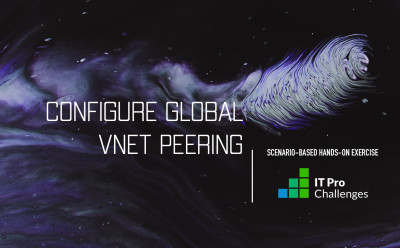 This **“Configure Global VNet Peering”** IT Pro Challenge virtual lab will teach you how to ... 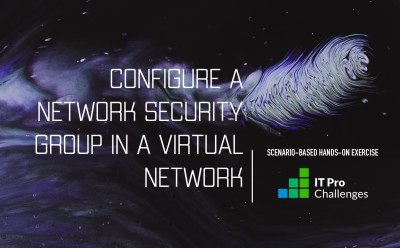 Configure a Network Security Group in a Virtual Network

The **“Configure a Network Security Group in a Virtual Network”** IT Pro Challenge virtual lab ...