As the digital transformation continues to move steadily, people become more dependent on technology. Nowadays, computerized systems are prevalent in all industries to manage resources and handle various business operations. Protecting these assets has become vital for the continued operations of any organization.

Cyberthreats are evolving every day in terms of number and sophistication. Malicious actors are continuously looking for new ways to infiltrate computer systems and networks. Amateur cybercriminals now have access to advanced Malware services (e.g., Malware as a Service) to deploy and launch sophisticated cyberattacks without the need to have a deep understanding of programming and hacking skills.

According to Cybersecurity Ventures, a cyberattack will occur every 12 seconds in 2021, and the projected global damage of cybercrime will reach 6 trillion by the end of this year (2021) (see Figure 1). On the other hand, the ongoing COVID-19 pandemic has impacted the number of cyberattacks. For instance, the US FBI has reported a 300% increase in cybercrimes since the start of the pandemic. 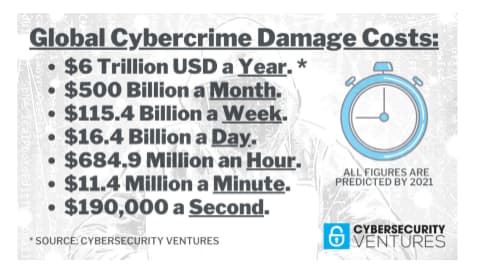 Protecting an IT infrastructure's security is not an easy task; even the largest enterprise that can afford the needed resources to counter cyber threats still falls victim to cyberattacks. Deploying network security solutions, especially on gateways, is considered the first line of defense to prevent malicious attacks from entering an enterprise network.

This article will list the five best intrusion detection system solutions, but let us briefly discuss what an IDS is and its types before we start.

What Is an Intrusion Detection System (IDS)?

IDS (see Figure 2) is a monitoring system that can be either software or hardware-based, which is used to scan network traffic to identify suspicious activities that can signify an intrusion. Once detected, the system will notify the System Administrator (Incident Response or the SOC team) to investigate the issue and act accordingly.

IDS systems are configured to identify malicious traffic using pre-configured patterns or rules, such as malicious emails trying to download Ransomware or other Malware. Traffic generated from exploit kits can be observed using IDS.

Compared with firewalls and intrusion prevention systems (IPS), IDS does not stop malicious traffic. Instead, it notifies the System Administrator via an alert while letting the traffic pass to the network as usual.

Software IDS can be broadly classified into two types: Host-Based and Network-Based IDS.

Host-Based IDS (HIDS)text in italic: A host-based IDS is installed on the end-user device. It is used to monitor network traffic to and from the device, monitors local system logs, observe running processes, detects registry changes and other critical system configurations.

Network-Based IDS (NIDS)text in italic: A network-based IDS is used to monitor total network traffic; this type has comprehensive visibility into all traffic passing through the network; however, it cannot detect malicious traffic or threats on endpoint devices.

It is seldom to see an IDS implemented as a standalone solution. As previously discussed, IDS does not stop Malware; it sends an alert when suspicious activities are detected. IDS also varies in its ability to see malicious traffic according to its type (host or network-based); deploying one IDS type will give an organization system insufficient protection. To achieve comprehensive security, it is wise to use a Unified Threat Management solution, which integrates multiple security products in one solution.

OSSEC OSSEC is an open-source HIDS program that is extensible through its wide extensive configuration options. For instance, a user can add custom alert rules and write scripts to take action when alerts occur. OSSEC can be deployed on all major OS such as Linux, Solaris, AIX, HP-UX, BSD, Windows, Mac, and VMware ESX. Like many IDS solutions, OSSEC allows an organization to meet specific compliance requirements, such as the PCI DSS, by offering file integrity monitoring capability to detect minor file changes caused by Malware attacks.

Zeek Zeek is another open-source IDS system for monitoring suspicious network traffic. Zeek observes network traffic and identifies possible suspicious traffic; after that, it creates compact reports about its findings. Zeek is also highly customizable., For example, a security team can configure Zeek to identify the suspicious file and download it. Afterward, it is sent to Analysis, while the Security team blocks the source of the file (IP address) and informs the appropriate employee about this incident for further investigation.

This article introduced and discussed the IDS system, its definition, types, how it monitors network traffic and identifies malicious behavior. IDS systems are not designed to stop malicious traffic. However, IDS is still a valuable tool in any organization's arsenal to identify malicious traffic using pre-configured patterns or rules and protects enterprise networks from various active cyberattacks.