A cyberattack is a term used to describe any attack against a computerized system, networks, or personal computing devices. A cyberattack aims to gain unauthorized access to, shut down, or damage sensitive resources and computing systems.

As the digital transformation moves at a steady pace, organizations' dependence on technology will increase. Most data are now stored digitally in so-called data centers and accessed via computer networks. Without a network, users can not reach data stored in a central location. However, computer networks are not only used for data sharing. For instance, the following are benefits of computer networks:

Cyberattacks are increasing and becoming more sophisticated every day. According to Cybersecurity Ventures1, cybercrime damages will reach $6 Trillion by 2021. Security experts predict the trending cyber threats in 2021 will be impacted by the COVID19 crisis and become focused on attacking remote employees' endpoints devices and expecting a spike in spear-phishing and other social engineering attacks.

This article will talk about the three most common types of cyberattacks that target computer networks.

Get Started With The "Penetration Testing and Ethical Hacking" Course Today >>

A DoS attack overwhelms target system resources (e.g., a server or network resources) with false traffic intending to shut down the target device or network to prevent it from responding to legitimate traffic. DoS attacks are commonly launched against high-profile entities' websites such as banks, online merchants, government agencies, money transfer companies, and even gaming websites. Although most DoS attacks do not lead-or executed with the aim- of data theft, the disruption caused by such attacks will cease target organization work operations, which can sometimes result in a substantial loss of revenue.

Another variant of the DoS attack is the Distributed Denial of Service Attack (DDoS) attack. This one uses a large number of computing devices to execute an attack against a single target. The DDoS attack is commonly performed by using botnets. A botnet (see Figure 1) is a compromised device infected with malware controlled by a botmaster. The botmaster instructs botnets devices to send traffic simultaneously to the target system to make it unresponsive and cause a DoS condition. 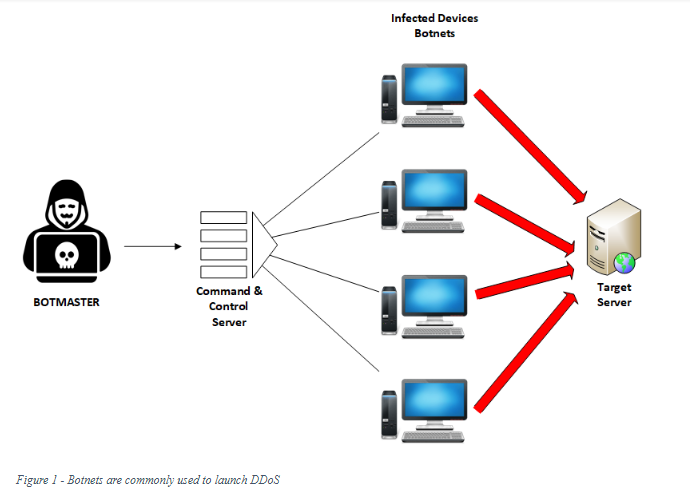 DDoS is more dangerous than DoS because of the large number of devices participating in the attack. Knowing who is behind a DDoS attack is also very difficult. For instance, the army of infected devices used to launch the DDoS is spread worldwide, and most compromised device owners do not know that their devices were a part of the DDoS attack.

Cisco predicats the number of DDoS attacks will increase to reach something over 15 million by 2023.

A plethora of tools, online services, and search techniques are utilized during the reconnaissance attack. OSINT.link website categorizes hundreds of free tools and online search services that can be used to gather intelligence from online public sources (see Figure 2). 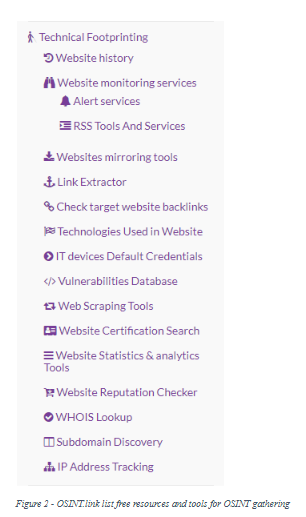 In a logical access attack, adversaries try to steal users' credentials to gain unauthorized access to the account and, consequently, the network. Brute-force and Man-in-the-Middle attacks fall under the logical attack category.

In a Physical attack, the intruder tries to gain direct access to a target computing device. Gaining such access is dangerous. The malicious actor can copy sensitive data from the target device to his/her USB device or install malware into the target system to compromise and infect the entire network.

Some social engineering attacks are used to gain sensitive information about the target. For example, dumpster diving is useful in locating important information left undestroyed and in the garbage, such as user lists and security access codes registered on non-shredded written papers.