There are many high-level programming languages; however, Python language gain increased popularity among cybersecurity professionals in recent years for many reasons like:

Many security projects are accomplished using Python programming, such as:

Python has witnessed enormous growth in demand, and there is no sign of slowing down soon. According to PYPL, the Python programming language was ranked number one until March 2021.

This article will discuss popular python questions that you can expect to have during a python interview.

Enhance Your Knowledge With The "Intermediate Python" Course >>

Question 1: What are the key features of Python?

Question 2: What do you mean by “Python is an interpreted language.”?

You do not need to compile Python code into machine language first before running them.

Question 3: What is the purpose of the PYTHONPATH environment variable?

PYTHONPATH environment variable instructs Python interpreter where to locate the module files imported into a program. It is used to add additional directories that Python search for custom Python libraries.

Question 4: What data types are supported in Python?

A module is a Python file (has py extension) with arbitrarily named attributes. A module can define classes, functions, and variables and may contain running code. Some popular built-in Python modules are os, sys, math, random, datetime, and json.

Global variables are declared outside a function scope, and any functions across the program can use them. Example of a global variable (see Figure 1). 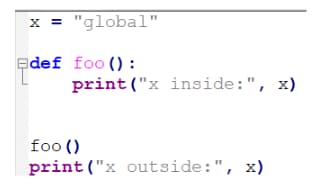 Local variables are declared inside a Python function or a local scope (see Figure 2).

Type conversion is referred to the conversion of one object data type into another data type. For example: converting an integer into a string. Some Python built-in functions for data conversion include:

Question 8: Write a simple program to sort a numerical list in Python.

Question 9: What is a lambda function?

Lambda is an anonymous function that can take many arguments but can have only one statement.

Inheritance allows one class to inherit all attributes and functions of another class. The inheritance provides the following benefits for Python programs:

Superclass (also known as parent class) is the one being inherited from.

Child class (also known as sub or derived class) is the class that inherits from another class.

Unlike Java, Python supports multi-inheritance when one class inherits the properties and methods from more than one parent class.

Question 11: How does Python manage memory?

Python memory is managed via private heap space. All Python objects are stored in a private heap which the Python interpreter itself manages. Programmers cannot access the private heap.

Python built-in garbage collector is responsible for freeing all unused memory so that private heap space can allocate memory again.

Python programming language is a must-learn for any security professional wanting to advance their career. Many penetrations testing and digital forensics tools are written using Python. Python also helps IT professionals automate numerous repetitive tasks such as network scanning and applying security templates on all devices connected to the same network.