Some might not be aware of what the OWASP Foundation is. The Open Web Application Security Project (OWASP) is a non-profit, international, community-led, open-source software project with tens of thousands of members working to improve software security. It acts as a source for developers and technologists to secure web and mobile applications.

What is OWASP Mobile Top 10?

The OWASP Mobile Security Project is a centralized resource that intends to provide developers and security teams the resources they require to build and maintain secure mobile applications. This project aims to identify and classify mobile security risks and provide developmental controls to reduce their impact or likelihood of exploitation. 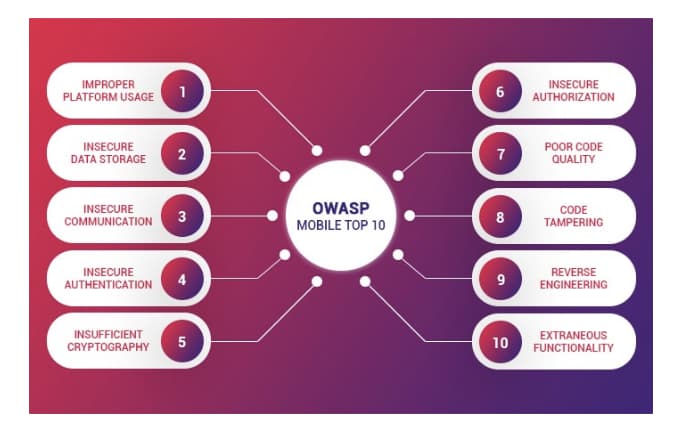 This has been ranked as the most prevalent mobile security vulnerability by OWASP Mobile Top 10 2016 list. This threat arises when iOS or Android platforms are not created per the developmental guidelines provided for security purposes. The applications available on the App Store or Play Store unexpectedly defy the developmental guidelines, implementation process, or best practices, resulting in improper platform usage.

This threat refers to the misuse or improper use of any platform feature or security control of iOS and Android mobile operating systems, like requesting surplus or incorrect platform permissions; misuse of the touch ID, which leads to unauthorized access of the device; or a public Android intent may reveal some critical sensitive information, or even permitting unauthorized execution.

A few steps to mitigate improper platform usage are:

In case our mobile device is lost or stolen, the attacker mustn't leak our personal information or gain access to any sensitive data stored on the mobile, even after exploiting vulnerabilities or using malware.

Though it is not practical for apps to store all the data on the mobile, it is crucial that, if the data is being stored, it should be secure and shouldn’t be accessible to anyone or any other app. Attackers tend to root or jailbreak the device to bypass the encryption protection and might even gain access to the filesystem. So, developers must secure the data to the highest degree possible.

A few steps to mitigate insecure data storage are:

Insecure communication refers to unencrypted plaintext data traveling within a network as it can be easily captured and read by an attacker who monitors the network.

Since mobile apps communicate by exchanging data using a client-server model from the device to the carrier network through the internet, the communication needs to be secure. The traffic must not be easily intercepted by proxies or attackers who misuse the transferred data.

A few steps to mitigate insecure communication are:

Some steps to mitigate insecure authentication are:

Insufficient cryptography is when the mobile’s cryptography reveals sensitive data about the algorithm being used for encryption and decryption, or the cryptographic process is revealed, exposing implementation flaws. The disclosure of such critical information assists the attacker in bypassing the encryption algorithm if it is weak, using deprecated encryption protocols for malicious purposes, or mishandling the user’s digital keys.

A couple of steps to mitigate insufficient cryptography are:

Generally, there are two types of users: normal and admin. Normal users have regular permissions and privileges, whereas admin users require elevated permission and privileges. Insecure authorization refers to the failure in verifying the user’s identity and failure in enforcing identity-related permissions. Suppose the mobile device cannot verify the type of user asking for resource access or permission. In that case, attackers may use this to their advantage by logging in as a legitimate user and performing privilege escalation attacks.

A few steps to mitigate insecure authorization are:

Mostly, mobile client issues are caused by faulty code implementations. This faulty code needs to be fixed locally as it is generated on the client and is distinct from server-side coding errors. Compromised quality of the client code may enable an attacker to permit malicious inputs to the app function calls to execute and analyze the app’s behavior to them. These inputs enable the attacker to perform remote code execution and buffer overflow on the app.

Sometimes the App Store and Play Store contain tampered versions of mobile apps, which the attacker uses to their advantage. Tampered apps may have modified the app’s binary data to incorporate a backdoor or malicious content. Attackers can also re-sign these fake apps, making them look authentic, publishing them on third-party app stores, or manipulating the user to download the app through a phishing attack.

Some steps to mitigate code tampering are:

The attacker uses reverse engineering to decompile the app, perform code analysis, and modify it using binary inspection tools. Once an attacker understands the code, it is easy for him/her to incorporate malicious functionality into the code. The attacker generally uses tools like Hopper and IDA Pro. When the app starts to function in the desired way, the attacker recompiles, and tests the app.

A few steps to mitigate reverse engineering are:

The developers’ team often codes the app so that they have access to a backend server, creating logs for error finding, or carrying staging and testing details, which sometimes act as backdoors for the attackers. This is an extraneous functionality, as this is useful only during the development of the application and not during production.

Attackers use these extraneous functionalities to their advantage by exploiting them directly since they don’t even require user participation. All the attackers need to do now to implement an attack is thoroughly examine the configuration files and working of the app’s backend system.

A few steps to mitigate extraneous functionality are: