How To Learn Artificial Intelligence From Scratch

Artificial Intelligence (AI) is one of the main computer science fields that will yield staggering future generations improvements. At the moment, nearly every area where information technology is used has improved from strides toward AI. This brings the question, what does it take to learn AI?? This article provides a guide for someone interested in a path that leads to mastering AI.

Usually, when talking about AI, the subject refers to a computer system that can perform tasks on its own that would normally require human intelligence and intervention. Behind this definition, there are two other important terms to understand. First, there is Machine Learning (ML), where a system automatically learns from large amounts of data and improves without being specifically programmed. The other term is Deep Learning (DL), where a system uses a specific network to identify complex patterns from data and extracts from it to create new features. Based on these definitions, it is easier to understand how to build an AI system. It is essentially a “conjunction” of a DL and ML system. An online search of the subject AI will likely yield an image similar to the one shown below: 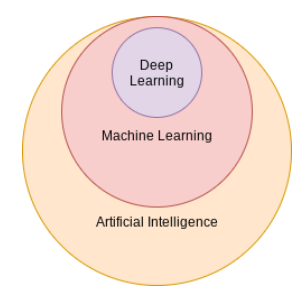 Based on the definitions previously discussed, it is clear that to learn about AI, one must understand ML and DL. Both subjects deal with data and using data to make decisions. To venture into how these learning methods are applied requires an understanding of the math used for AI.

Get Started With The "AI/Machine Learning" Course >>

Math is the first and most important area to learn for success in the AI field. The level of maturity of AI requires knowledge of the math behind the algorithms. This is particularly important for those that want to be more than just a simple coder. This subject is for those that want to know the “why” behind something and not just get some task from someone and simply coding the solution.

The key math areas required for learning AI are:

These three areas are the building blocks of AI. This is because all three subjects are layered and provide a firm foundation of knowledge on which the other necessary skills can be built. The reason for learning math stems from the algorithm and the problem necessary for ML, DL, and, consequently, for AI. Calculus is important because a derivative returns a rate of change, and an integral is used to calculate the total amount of a quantity over time. Most often, a physical phenomenon is represented through observation of an area or a curve. For example, imagine a gradient from an image. Calculus can be used to evaluate it, and this is particularly important to recognize something like a deep fake, for example.

Linear Algebra is the tool used to manipulate a group of numbers. This is done using a matrix and vectors. This is important to represent an image. The vector can indicate a single line, and one can indicate the value of a color by following the RGB notation since an image has more than one line. A matrix is used for the representation. Manipulating the matrix and the value connected with the image is where Linear Algebra comes into play.

ML uses probability to evaluate and validate hypotheses and use the data to calculate the probability of an event’s occurrence. Imagine, for example, searching for something with Google or building a recommendation system. These systems use probability theory to predict the result of the search or the product that is desired for purchase.

Learning Artificial Intelligence is more than learning how to use a library. Artificial Intelligence consists of a series of algorithms used to define reality, which involves a lot of math. Being a good programmer is necessary to develop an AI system, but it is the last piece of the puzzle. To be a good AI Engineer/Scientist, it is critical to understand the math behind the algorithm and model to design the AI system.