As the world continues to digitalize, computer networks' dependence as a backbone of any computing environment becomes the de facto standard. The network is the medium (whether it is wired or wireless) used to connect one or more computer systems and, often, to the internet.

Computer networking brings huge benefits to its adopters. For instance, computers can share data and resources (hardware devices, software programs) across the network by using networks. It is common for companies to use a central server to store all data and allow all connected devices on the network to access this data from one central location.

This article will talk about the most popular type of computer networks, give examples for each type, and talk a little bit about the main characteristics that distinguish each one.

Computer networks can be classified into four main categories (see Figure 1) according to the geographical area they cover:

PAN is a personal computer network that enables communications between individual computing devices such as computers, laptops, tablets, smartphones, and printers and provides an internet connection for such devices. PANs (see Figure 2) use either wired (USB or FireWire) or wireless connection (e.g., Bluetooth, infrared, ZigBee and ultrawideband), the wireless PAN (also known as WPAN) has a few meters range, which is enough to connect nearby devices such as wireless keyboards and mice, cell phone headsets, gaming consoles, and wireless printers to name a few. Connection via PAN network consumes very little current as PAN connection protocols are simpler than those used with the WiFi networks (to reduce the required processing power when connecting to PAN network). 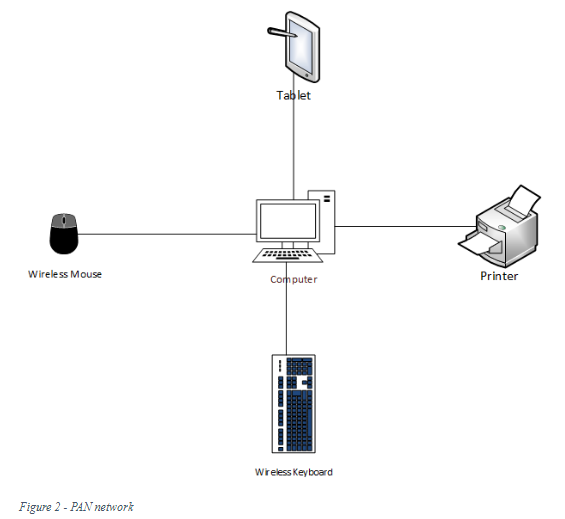 Get Started With The "MTA 98-366 Networking Fundamentals" Course Today >>

A Local Area Network (LAN) is a privately owned computer network for connecting computers and other peripherals devices within a limited area (e.g., a school, university campus, hospital, small factory, and even within a home-office). LAN networks are used widely to simplify data, programs, peripherals (such as printers, scanners, hard-disks, and DVD-ROM), and internet connection sharing, among other connected devices in the LAN network. LAN devices are commonly connected via a switch (see Figure 3) –or multiple switches using a private addressing schema (as defined in the TCP/IP protocol stack documentation). 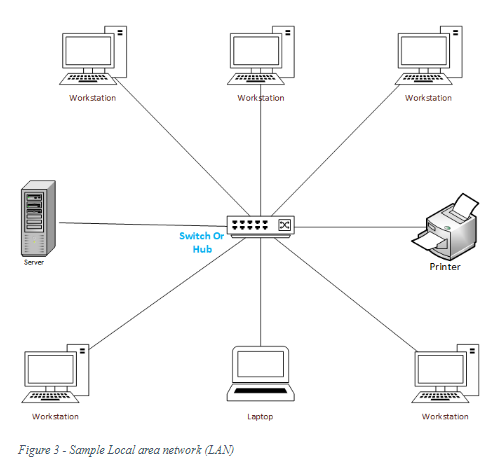 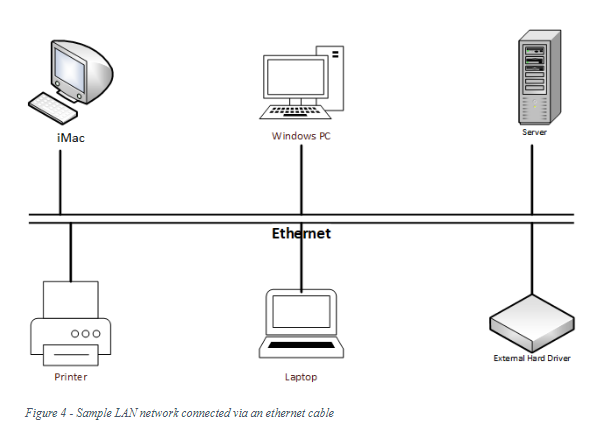 A LAN offers numerous benefits for businesses; for example, a single internet connection can be shared among all LAN devices. Data sharing is also very easy, as data can be stored in one central location, and software programs and peripherals can be shared across the network, which significantly reduces the cost of software and hardware purchases. On the security side, LAN is considered secure because data traveling through the LAN does not leave the internal network, and all data can be managed at only one place.

Modern LAN networks use fiber optics instead of ethernet cables to boost the connection speed to 10 Gbps.

This is a large computer network that covers a wider geographical area than a LAN. MAN is commonly used to cover a city or a large facility (spans many buildings in different locations). MAN is used to connect multiple LANs and can be used to provide an internet connection to LAN networks. A MAN is larger than a LAN but smaller than a WAN (covered next).

Organizations use a MAN to connect multiple LANs located in separate geographical locations (see Figure 5). This helps them save the cost of leasing a connection from third-party providers (e.g., a telephone company).

MAN is commonly established using fiber optic cables, and its diameter can span a range from 5 KM up to 50 KM. Routers and switches are used to establish and run this type of network. 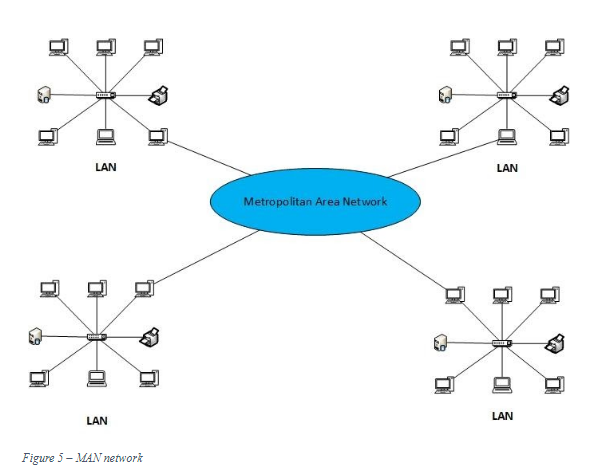 WAN is used to cover a wide geographical area such as a town, country, or entire continent. WAN can be either open to the public or a privately owned network. WANs facilitate communication and allow sharing of all data types between users residing in different geographical locations that span over the entire world. This makes WAN the largest and most expensive type of computer network invented.

The most obvious example of WAN is the internet. WAN is used to connect different LANs and MANs through internet service providers (ISP) to form the internet.

WANs are commonly established by service providers who, in return, lease their WAN to other entities such as government agencies, corporations, or to the public. WAN customers use the network to communicate with other users anywhere on earth and share and store information. Entrance to a WAN is granted via different means such as Virtual Private Network (VPN), internet access, or cellular networks.

WAN allows organizations to grow outside their borders and simplify communications and information sharing globally and at low cost, compared to other communications means. Without WAN connections, organizations' networks would become isolated to geographical areas, and connections between branches located in different countries would not be possible without paying for costly infrastructure and/or third party service fees.

In today's information age, computer networks' needs becomes vital to simplify communications and information sharing across the world. Can you imagine a world without email, blog, chat, e-commerce websites, online gaming, and other services offered via the internet? All these services are delivered to you via computer networks.