What Letters at End of Intel CPU Model Numbers Stand For

Like the curious type, some people may wonder what those random letters are at the end of Intel CPU model numbers and wonder why they are there? Intel is one of the leading CPU manufacturing companies. It is also the guiltiest for throwing seemingly random letters at the end of a product name, so it might be difficult to understand the difference between a Core i3 and a Core i5. As a general rule, bigger numbers are better! When looking at a product page or a specification sheet for a laptop, or even some desktops, anyone will notice letters attached at the end of the CPU Model numbers too (see Figure 1).

Intel processor names are composed of the following parts:

Brand Modifier: This piece is not included in all Intel processor family; for instance, Intel Pentium and Intel Celeron processors do not have a brand Modifier name, while the Intel Core™ processor series includes the following brand modifiers i3, i5, i7, and i9.

Generation Indicator: All Intel core processors have a generation number associated with them. In a four-digit processor number, the first digit typically represents the generation (e.g., a processor with the digits 4200 is a 4th gen processor). In the 10th Generation Intel Core processors, the first two digits in the product number will be 10 (see Figure 1).

SKU Numeric Digits: The majority of Intel processors will have a Stock Keeping Unit (SKU) number located at the final three digits of the product number. When the SKU number is high, this means the processor has more features. Of note, both processors should belong to the same brand and generation for this rule to be valid).

What do the letters in the Intel processor family stand for?

The Intel processor family's power and features can be distinguished by looking at the "Product Line Suffix" letter in the processor name. However, before beginning this discussion, it is useful to know how to retrieve a used computer's complete processor name. This can be achieved by using a free system information utility called CPU-Z (see Figure 2). 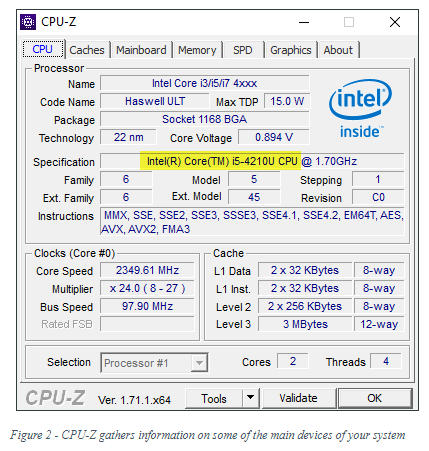 Now that we know how to retrieve our processor name and number let us see what each letter in the "Product Line Suffix" stands for.

So, in summary, maybe Intel could do a better job of making these letter denotations simpler and more consistent for consumers. However, at least to Intel's credit, someone over there recognized the problem and spearheaded the creation of this lengthy website to help people decipher the denotations' ever-shifting meanings.