With DES, data is encrypted in 64-bit blocks, with a 56-bit key length, and with output ciphertext of 64 bits. DES has the same structure of a Feistel Cipher but without Initial Permutation (IP) and Inverse Initial Permutation. The DES encryption process can be further divided into the following stages:-

1. Key Generator Algorithm: The key generator passes through many steps to produce subkeys. 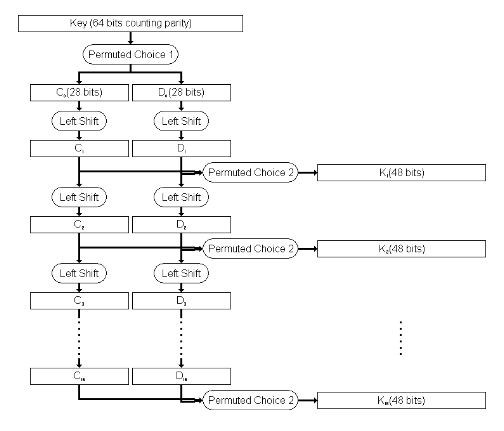 1.1 The key generator algorithm takes a 64-bit key as input. The input key number table from 1 to 64 is as follows: 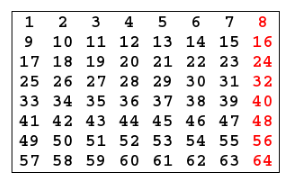 1.2 Every eighth bit is ignored and produces 56 bits. 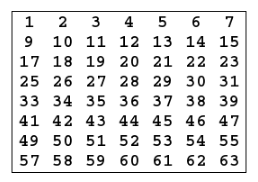 1.3 These 56 bits pass through a Permutation Choice one (PC-1) and displays as follows: 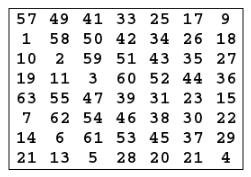 1.7 The Permutation Choice Two output in each round is used as input to the encryption algorithm.

2.1 There are two inputs to the encryption algorithm:

2.2 The encryption algorithm also passes through many steps to produce a ciphertext. See the figure below: 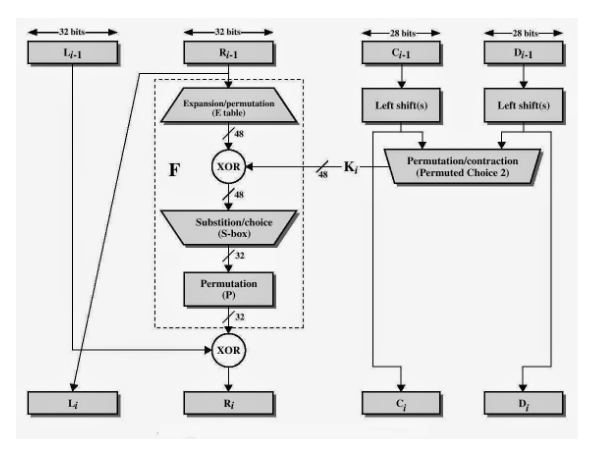 2.3 The plaintext block 64 bits pass through an IP that the rearranged bits and produces the permuted input. 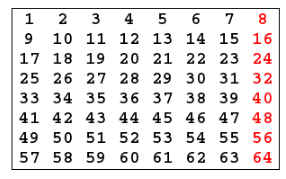 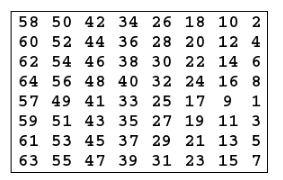 3.3 The Inverse Initial Permutation is: 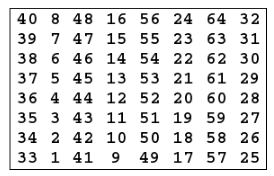 3.5 Expand R 32 bits to 48 bits to fit the subkey by performing the Expansion permutation. 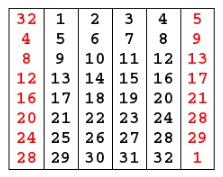 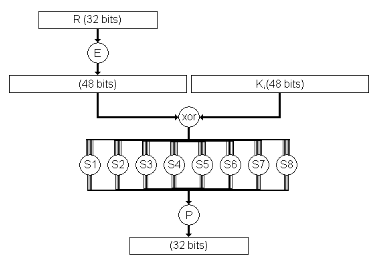 Substitution Function is rolled by S-Box. S-Box consists of 8 boxes, each of which accepts 6-bits as input and produces 4-bits output:

5.2 Each block will perform a substitution with S-Box with the same number: 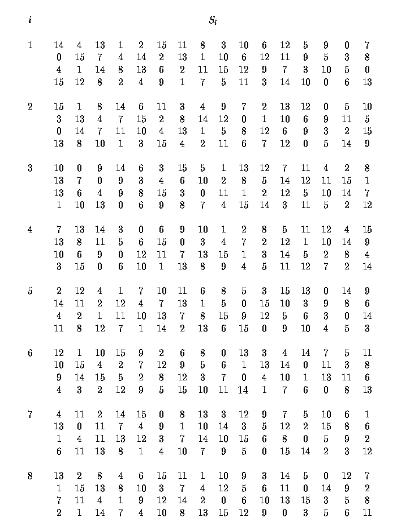 5.3 The first and the last bits of each block together as 2-bit values indicate the number of rows in the same number S-Box.

5.4 The middle four bits of each block together as-bit value, indicating the number of columns in the same number S-Box.

5.5 The decimal value, selected by the row and the column, converts the to-bit value in all S-Boxes.

At this point, the function F is finished.

6.2 Perform a 32-bit swap on the result of the final round. Then, perform Inverse Initial Permutation (IP−1) on the swapped data to produce the ciphertext 64 bits. Decryption Algorithm: The inputs to the decryption algorithm are ciphertext and subkey __K__i but in reverse order, start with __K__n then K(n−1), and so on until __K__1 in the last round.Note: You can use a DES Calculator https://github.com/Hamza-Megahed/des-calculator to study each round in detail.

DES being a block cipher satisfies the following beneficial properties which make it strong:-

To implement DES, we use a security provider, for example, BouncyCastleProvider. The secret key that has to be used can either be user-defined or randomly generated using KeyGenerator from the javax.crypto package. Then we will add two methods for encryption and decryption, respectively, and later add a provider. Encryption will use cipher mode ENCRYPT_MODE, and decryption will use cipher mode DECRYPT_MODE. DES, being a symmetric block cipher, will use the same key to encrypt and decrypt. We will use the getAlgo() method to provide the algorithm to be used. You can refer to https://dzone.com/articles/security-algorithms-des-algorithm for a better understanding of the practical implementation.